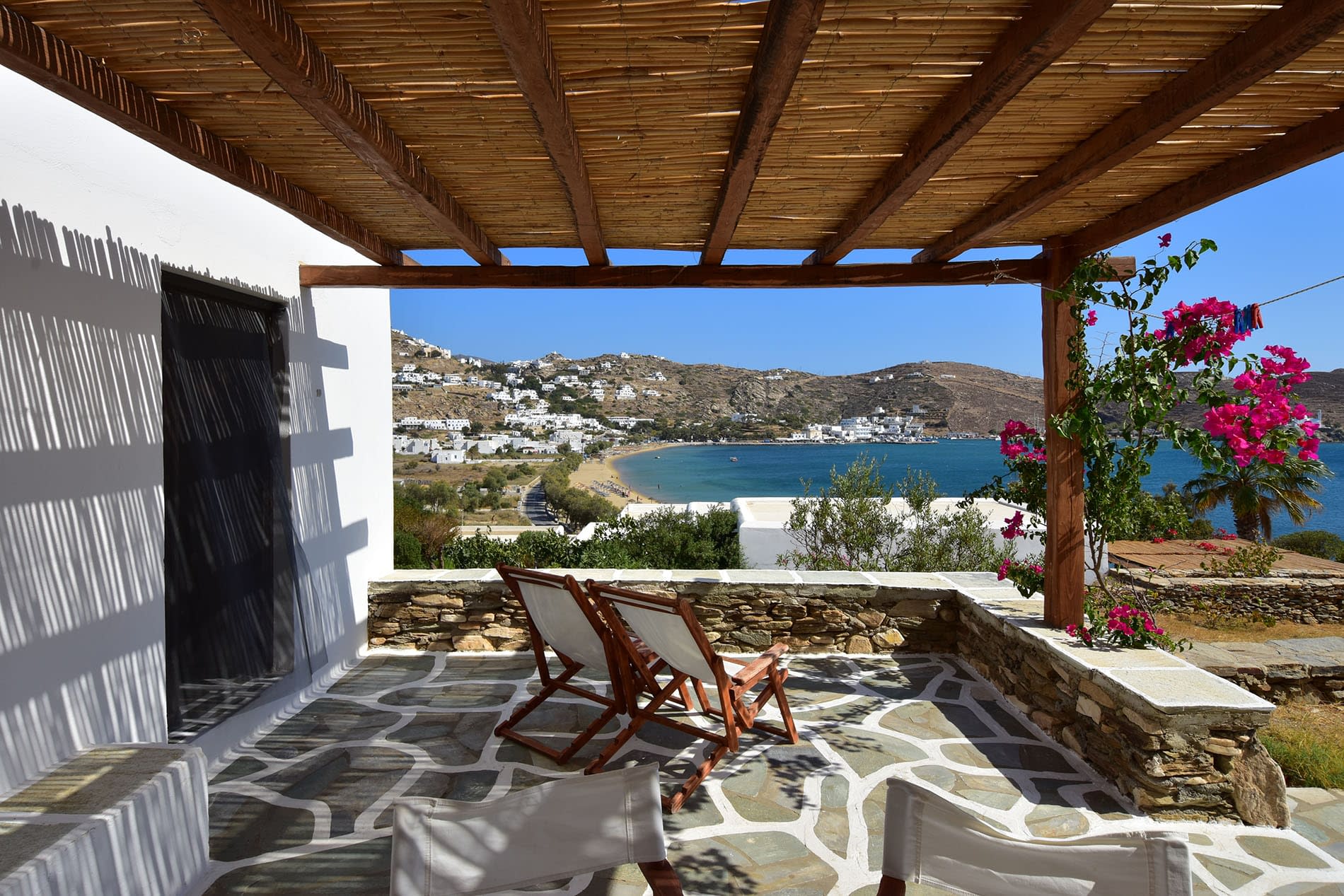 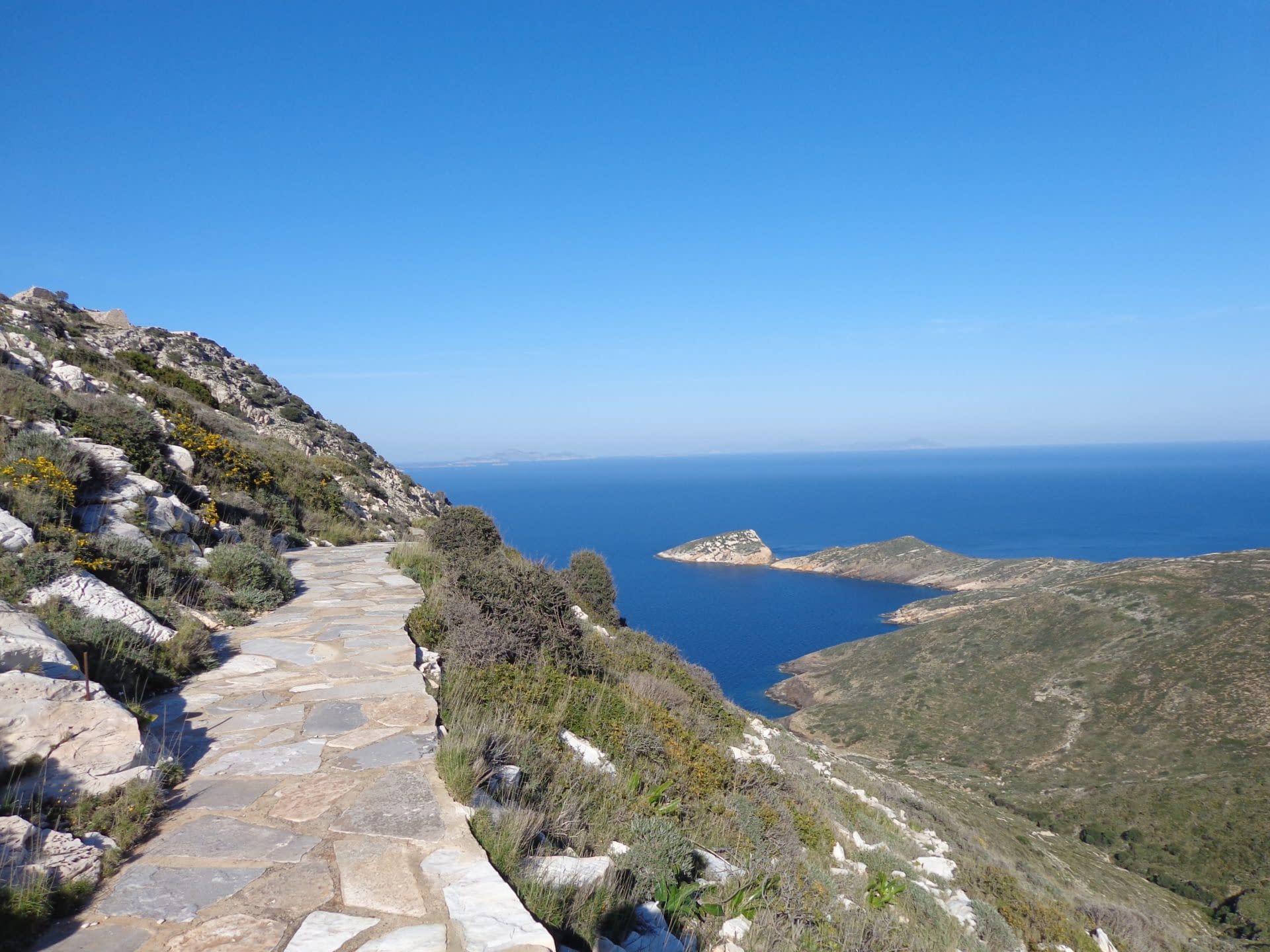 Modern technology once more deprives us the contact with nature. Road construction and the convenience of the car, discredited the network of paths, which continue to be used even today for stockbreeding activities. It is worthwhile to turn back the pendulum and discover the traces of cultural elements of Ios, as well as the cultural and natural wonders.

We recommend you various hiking trails, and you decide what suits best your concerns and your needs. Before selecting one, you should consult the map with the trails. The routes can also be walked in the opposite direction.

The first urban image of the island is an area of natural interest and fully integrated into the natural landscape. The traditional settlement of Hora, which protected, is one of the best preserved examples of Cycladic architecture. With very interesting elements such as steigadia (roofed parts of alleyways) and benches (stone benches, we would say today).

Monuments of faith and love of the locals to the gleaming white, are the 365 churches scattered throughout the island. Each one with its own personal story and specificity. On our hiking routes we will come across several small chapels fully integrated into the Cycladic landscape and simultaneously a representative image of it.

In the region “Perivolia”, you are impressed by the vegetation and the fruit trees, not reminiscent of the Cyclades, but area with abundant water. In this region, there is the church of Agios Prokopios and the landowner (Rania Cave-Mykoniatis), has done an attentive reconstruction of the area, highlighting older structures that existed before, such as the spring, the stone water tanks, and the stone groove that watered the gardens and buildings.

Throughout the island, by having a closer look, you can distinguish old stone buildings, which are “cells”, as the locals call the stockyards or the summer derelict houses. Before the motorways were built, the inhabitants, after the end of the winter, moved to their farmhouses, where they spent their summer, engaged in the land and their animals. They sowed, mowed, and pillaged (there are countless half ruined threshing floors) so they can have their own bread. They dug their vineyards and harvest grapes, to have their own wine (there are several crushers and some of them are even sheltered). They nurture their olives to have olive oil and the table olives that accompanied their food. They were grazing their animals and made cheese  (There are several stone built dairies, shown the focus which they put the cauldron and stone shelves for maturing of cheeses). Equally interesting, is the image of the summer residence, with the oven for bread baking, the parostia (the fireplace where they were cooking), the fitted cupboards and the locations of various items. The houses and the sheepfolds, were all roofed and manufactured in the following way: the rafter are put on the bottom, over it a layer of pole, then a layer of bulrush and a layer of seaweeds for the roof insulation (humidity and heat). Finally, it is covered on the top with salt lake ,or if it wasn’t available, they used red dirt.

Also the biggest part of the island is covered with terraces (drystone walls), that gathered the little fertile soil. There are many wells that ensured the precious water for the needs of the family and the animals, as well as the watering the small garden of vegetables and fruit trees. If there wasn’t a well, the household and the animals had to drink water by a nearby spring, but fortunately the island has a rich aquifer, contrary to the other islands of Cyclades.

You will of course recognize the cultural monuments of the previous hiking trail and enjoy the nature of the massif of Ios. It really is a pleasure for the visitor to walk the old paths of the island that give him the ability to approach all of the above: the residences, the sheepfolds, the terraces, the wells, the threshing fields and much more. The whole island is full of surprisingly found herbs, wildflowers and rare plants of the Cyclades (don’t just think that the land is dry like the summer). There are also birds (e.g. hawks, shags, owls) and wild animals (π.χ. hedgehogs, wild rabbits, ferrets).

The municipality of Ios, has built a shrine of modern culture, the Gaitis Museum. The location of the museum is supervisory to the modern images of the Cycladic culture and nature, while being a focal point a passing of centuries (connecting present days with the past). The Gaitis museum brings together the residents of Ios, the visitor of the island and the intellectual with the personality and work of the renowned contemporary painter, while hosting periodic and / or permanent works of other eminent artists. For the time being its closed.

When there is not a cultural event, taking place at the Odysseas Elytits theatre, you can try your own acting skills while viewing the whole bay of Mylopotas and the deep blue. The theater “Odysseas Elytis” is stone built, with Parian marble, where the orchestra is usually located. It is worth mentioning the Environmental sensitivity of the Municipality of Ios, who built the theatre at the natural inclinations of the old dump site of Ios, making it a cultural monument.

There is also of course, the beautiful image of the windmills. Wind was a crucial part fort the life of the local society, providing flour for bread or nut. The windmill region of Ios had 13 windmills. The Municipality of Ios has already renovated three of them.

Epano Kampos was the old granary of the island, and nowadays it can be described as a land of high productivity with its terraces and the most fertile soil of the island. At this particular region you can see for yourself the Island’s rural tradition.

The residents of this small island have tangible signs of the greatness of the Cycladic civilization in their immediate surroundings and have adopted techniques and practices by observing the achievements, left by their great ancestors. Adapting them using their inventiveness , to the requirements of the lean Cycladic natural environment and to their personal needs, they continue so far to produce unique cultural samples.

At the area Ellinika, outside  the church of Panagia, you can notice ancient architectural elements and by having a closer look at the cell located next to it, you will be impressed by the size of the slates used for its construction. The toponym “Ellinika” (Greek) predisposes an area of archaeological interest. You can make your own estimate about the construction age of the building next to the church.

After Aghios Vlassis you can take alternative routes. If you take the left route will pass in front of the archaeological site of Skarkos. The modern archaeological research of Ios by the group of Mrs.Martharis, brought into light a unique specimen of the Protocycladic Ι and ΙΙ period (2.800 – 2.700 B.C.). The earliest traces of human presence that are identified at the island, so far, are found at the Skarkos location. It’s a  hill with an urban organization similar to the hill which is now the Hora of Ios. You could say that Hora a replica of the ancient settlement, even the activities of the residents have similarities despite so many centuries have passed. It should be noted that the archaeological site of Skarkos, was awarded for its outstanding quality of its  space  configuration and most of all, for the minimal and extremely sensitive interventions, which did not alter the unique landscape. The awards of cultural heritage, were awarded jointly by the EU and Europa Nostra (Pan-European Federation for Cultural Heritage).

At the region Pigadakia, are 3 old wells.

Of course we cannot forget the 33 beaches. The beaches of Ios are suited for every taste, whether one wants sand or pebbles, either you want a crowded place or solitude, with unique landscapes of stone artefacts of nature, with rare flora and fauna. For the warm days of summer there are routes ending up at the sea breeze.

For Kolitsani beach there 2 different routes, each one of them starting at a different point in Hora.

There is a dirt road with large slopes reaching the Valmas beach, but it’s relatively difficult for conventional cars. We suggest you left your at the port and follow the path starting behind the church of Aghia Irini.

At Valmas beach you will also find a traditional tavern, so you can have a beverage and cover yourselves from the sun under its shade.

The Municipality of Ios has restored cobbled paths and cleared traditional aging paths, thus restoring the past routes, so the visitors of the island can enjoy with walks, the Cycladic nature and our kids to follow the footsteps of their ancestors.

The natural environment of Cyclades is our most precious heritages and must preserve it by any means. The island, in its bigger part, is covered by terraces (drystone walls), gathering in the past the little fertile soil and giving the opportunity to the Cycladic family to harvest the land and feed its children. The effort and the toil of so many generations and the pristine nature of the Cyclades is our duty to preserve it and keep it clean. 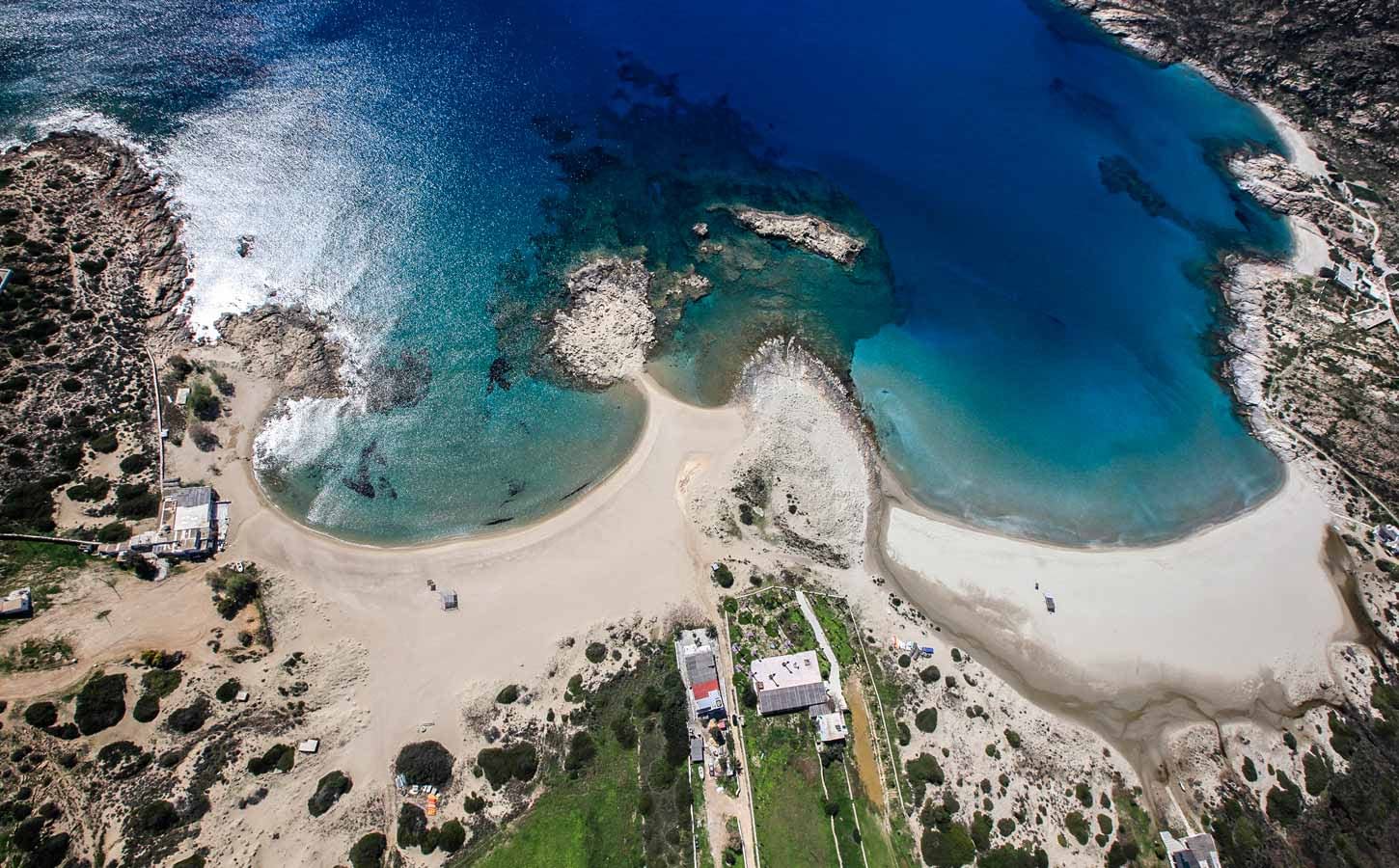